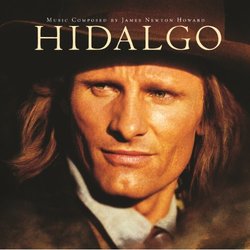 While watching Hidalgo in the theaters, I had the distinct impression that Viggo Mortensen could continue to star in Westerns and never want for anything else in his film career.  The man could have been serious competition for male Western stars in the genre's heyday of the 1930's through the 1960's, more contemplative than John Wayne, better with fisticuffs than Gary Cooper and more mysterious than William Holden.  Simultaneously, I realized that Westerns are well suited to James Newton Howard, who struggled through years of romantic comedies and weepy dramas before cutting his teeth on action scores.  Wyatt Earp (1994) was a phenomenal debut, a score brimming with melody, tension, kinetics and lyricism.  He tipped his hat to Copeland and Elmer Bernstein but his first musical foray into such solid genre territory was a Howard score through and through, imbued with his personal flourishes and harmonic color.

I was completely happy with his music for Hidalgo with the first two minutes of the "Main Title".  We enter the score slowly, led by mysterious, bass flute styling in a Native American flavor, representing the main character Frank's rich heritage.  More woodwinds quietly join (and also return at the start of "The Second Half") before strings and French horns almost imperceptibly present us the main theme, which continues to arc higher.  It is not sounded out in a swelled passage as in the opening cue from Wyatt Earp, but much like Frank (and Viggo Mortenson), there is a quiet strength in its first presentation, gaining your respect but not through showboating.  Finally the cue's tempo increases as Frank and his horse Hidalgo confidently win another race across the American West, an infectious energy which is continued in "Don't Waste Our Money".  This is music I love from Howard and I think he also relishes composing in this vein since there is so much joy inherent, you can almost swear the score was smiling widely at you.

The Middle Eastern elements appear appropriately enough in "Arriving In The Desert", in percussion over a long-lined, sensuous string melody, with an apparent nod to Maurice Jarre's work on Laurence of Arabia.  The Americana elements must now share much of the film with these stylings, but it makes for an exciting twist on how Western film scores are structured.   Duduk and bouzouki mix freely into the wide open Americana harmonies in insistent brass with rattling snares and timpani combinations.  "The Race Begins" and "Sandstorm" are pulse-pounding tracks in the vein of "Wagon Chase" from Wyatt Earp and "Avalanche" from The Vertical Limit, with a haunting trumpet solo to close out "Sandstorm".   The next three tracks are dominated by the Middle Eastern instrumentation, beautifully languorous string melodies in '"Katib" and a hypnotic solo vocal by Hovig Krikorian in "Montage", an enveloping 7 minute meditation of its own.

A rollicking burst of rough and tumble action in "The Trap" leads off the last quarter of the album, full of Howard's off kilter rhythms.  The bright infectious energy returns in "The Final Three", as Frank and Hidalgo barely push ahead of their competition in the last mile of the desert race, seemingly propelled by Howard's music.  The Middle Eastern thematic material also makes a strong appearance here, fighting for supremacy but ultimately losing to the grandest, proudest statement of the main theme.  The final track, "Let 'Er Buck", begins as the "Main Title" does, with the gentle, Native American woodwinds leading into quietly strong strings and brass, plus a bit of play as Hidalgo is set free by Frank to run with his Mustang brothers.  It is a bittersweet end, as Frank lets go of his closest companion but it just feels right having Hidalgo roam unbridled.  It is a solid, cathartic finale to a wonderful album, but I am a bit saddened that the bold, brassy music covering the rescue of the sheik's daughter is omitted.  Ah well, regardless of this what we have is another marvelous James Newton Howard ride through the West.