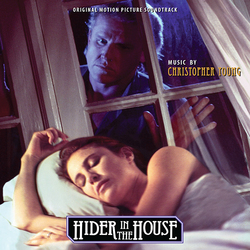 Hider in the House

Intrada presents a new edition from a composer renowned for his work in thrillers and horror – Christopher Young's 1989 Hider in the House. The film revolves around the unbalanced antagonist Tom Sykes (Gary Busey). Driven to experience the idyllic home life he was denied as a child, Sykes ensconces himself in a hidden room in the attic of a new house. At first, his activities are relatively benign: he spies, listens in on private conversations, and, when the family is out, uses the house as if it were his own. But the threat of exposure leads him to acts of increasing violence, culminating in murder. Young's juxtaposition of alienation and empathy in the score for Hider manages to humanize Busey's mentally disintegrating stalker without minimizing the growing terror of his presence.

As John Takis writes in his notes:
"The tension is encapsulated in the lengthy suite—essentially a character study—that Young created to open his album program: "The Hider" begins with the film's main title, a subdued, wordless treble chorus that evokes a distinctly religious feel. Slowly, orchestral dissonance intrudes and overwhelms the chorus—the strangling of innocence given musical shape. The mood grows dreamlike, awash with spectral, cavernous textures and eerie vocalize. Eventually, the score's most prominent motif appears: three rising, crystalline notes that repeat and repeat with the quality of an aborted lullaby. Lost innocence is compounded with arrested development and obsession. Incrementally, the music becomes more tonal. Sorrowing strings drift into a kind of processional, suggesting a broken soul, wandering and without purpose. As the suite continues, the music wafts between melancholy atmosphere and passages of horrific tension and suspense; an indication that sadness and tragedy have birthed something violent and altogether disturbing."

For this reissue, Intrada has remastered the original CD program released in 1990 and commissioned new notes from John Takis. While the score garnered little attention back in its day and the film seems long forgotten, the score remains a testament to Christopher Young's artistry. Intrada presents this reissue to showcase Young's brilliant work especially in a genre so suited to freeing him to reach the full power of his creativity.