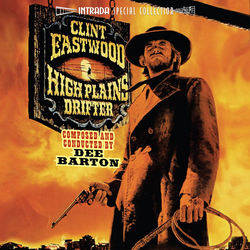 Writing the music for Universal Pictures' High Plains Drifter (1973), composer Dee Barton would display his flair for the unusual. His highly unorthodox music balanced the requisite touch of Ennio Morricone (this being a Clint Eastwood western) with a sophisticated meld of early synthesizers, female voices, dry guitars, lively percussion and full orchestra.

Barton's music was tonal with its main themes and atonal in its suspenseful and violent moments, resulting in a fascinating soundscape to go with Eastwood's images. The main theme is a strongly melodic minor-mode idea, saddled in appropriate western style, like Eastwood on screen. It's a haunting tune that plays through the main titles, but even this very tonal music is preceded by complex, dissonant sounds in synthesizers accompanied by wailing female voices in a seeming freefall.

As originally envisioned, Dee Barton's score was longer and much broader in scope than the finished picture suggests. Probably the most interesting aspect of the deleted cues is that Eastwood dropped virtually every one of the larger orchestral cues and sequences that suggested traditional western scoring and stayed with the experimental cues, the dissonance and most of the unorthodox material. This is particularly noticeable in the flaming finale.

Barton added considerable brass to his orchestra and wrote several minutes of aggressive battle music. Like the other orchestral music, these exciting pieces were dropped. And, as with those other cues, they can be heard here for the first time since they were recorded.

To present this complete score on CD, Intrada was extremely fortunate that Universal Pictures vaulted every roll of the original three-track stereo session masters in beautiful condition, even though the film itself was only mixed in mono.