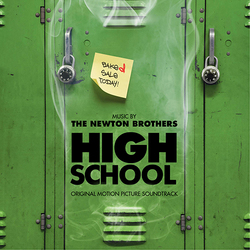 A rare breed in MovieScore Media's catalogue, pop and rock-influenced scores—as opposed to the classical sounding orchestral soundtracks we usually release—definitely deserves a place here as long as they are interesting and of high quality. High School is one of those!

We are proud to present the entertaining, youthful and infectious score from the high school comedy starring Adrien Brody, Michael Chiklis and Colin Hanks that had a limited theatrical release in June and is now coming out on DVD and bluray.

The music is by The Newton Brothers, an up and coming film scoring duo whose other credits include the acclaimed indie drama Detachment as well as the recent action movies Hijacked and Setup. Infused with a lot of rhythm and movement, the music for High School features a lot of driving, guitar-based tracks, as well as some quirky underscoring (especially the latin flavored music for Adrien Brody's character, Psycho Ed) and more ambient thematic material.