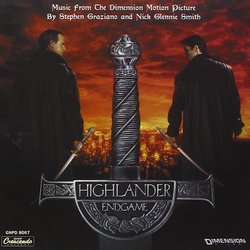 It spawned three film sequels, and a highly successful television show. So it can't be said that Highlander was not a successful franchise. However, given the general consensus that the sequels to the first film were pretty bad, I think it's safe to say that it is now a dead franchise. Oh sure, the television show was a pretty big success, and I have no doubt that it is because of that fact that they even bothered to go ahead and make Highlander Endgame. As it was with Star Trek Generations, Highlander Endgame was supposed to be a "bridging film" that passed the cinematic torch from film-immortal Connor MacLeod (Christopher Lambert) to television-immortal Duncan MacLeod (Adrian Paul). Unfortunately, it's just a pretty bad movie.

Composer Nick Glennie-Smith wrote a score for the film but then left the project, and was replaced (at the 11th hour) by Stephen Graziano. But the final film ended up using both composers scores - even though Glennie-Smith had his name removed from the film. The funny thing is (or sad thing, depending on your viewpoint) the music was the best part of the film. GNP Crescendo released the soundtrack album to Highlander Endgame and wisely included both Graziano's and Glennie-Smith's scores.

Graziano does an excellent job arranging the traditional song "Bonny Portmore", heard frequently in the "Highlander" television series. The "Opening Titles" cue runs over ten-minutes in length, and encompasses many of the themes that Graziano will bring to the score. It begins with a light suspenseful piano motif as well as a more exciting guitar and bagpipes (and strings) theme. It's melodic and it's a joy to listen to. There are even some choral moments that create a feeling of wonder and mystery. "Motorcycle Gang Fight" is a more rock-based cue, with plenty of crashing electric guitars and synth with an underlying percussive groove to enhance the action on screen. Unfortunately, some of the synth string work sounds very fabricated - it just doesn't mesh as well as the other string work on the album.

"Say Goodbye To Kate / Last Supper Slash" is a great dramatic cue that uses all of the elements I enjoyed in this score - primarily a dramatic string section, a great percussive rhythm, and a female soloist wailing in a foreign tongue. I don't know why, but it's really dramatic and stands out on the album. Up until this point, Stephen Graziano has written all of the cues - but now we hit an "amalgam" cue. "Heather Cuts Her Hair" contains music both by Graziano and Glennie-Smith - even though (to the best of my knowledge) neither of them worked together. It's the first time we get a hint of Glennie-Smith's themes, and I liked what I heard.

"The Legend Of The Immortals" is a ten-minute long cue that starts out Nick Glennie-Smith's segment of the score album. It's mostly atmosphere for the first minute or so as it slowly builds. The resulting theme is something straight out of Glennie-Smith's repertoire - a great theme that sounds like it might have been better placed in a Jerry Bruckheimer film than this one. But nonetheless, he provides the right tone for incidents playing out on the screen. "Connor and Duncan Fight Together" is an upbeat traditional-sounding period piece that must have been fun to write because it is so different from the rest of the score. "Attack At The Loft" is another pounding action cue that works great, considering Glennie-Smith's past experiences at Mediaventures. The most dramatic cue he wrote (ala "Heather Cuts Her Hair" is "Killing An Old Friend" - it's emotional and powerful, and takes full advantage of the themes from the previously mentioned cues.

The liner notes in the album are lengthy and informative, and the production design is nicely presented. Running a hair over an hour, this might not be a score to rush out and buy, but it's certainly filled with some quality moments. It's just unfortunate that the film didn't.