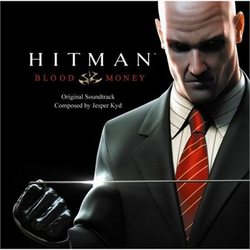 Performed by
The Budapest Symphony Orchestra and the Hungarian Radio Choir

Hitman: Blood Money is the fourth game in the Hitman video game series, and once again, Jesper Kyd returns to fulfill music duties. Overall I have mixed feelings about all of the Hitman scores - the more orchestral approach hits home to me more so than the electronic stuff (i.e. Hitman: Contracts). Never-the-less, I enjoy Kyd\'s work. Blood Money is a real treat for me in that this is the return of a primarily orchestral score. While it\'s not as thematic as the first of the Hitman games, there is enough material here that will satisfy most soundtrack collectors.

"Apocalypse" sets the tone for the album. A male chorus chants over a taiko percussion rhythm followed by a female choir chanting against the male chorus. Brass hits and electronic resamples of chorus join in as the track builds. I guess one could say that this is the Blood Money theme. Kyd is no stranger to using chorus as a dominant orchestral device. Freedom Fighters, another game composed by Kyd, was (to my knowledge) his first score in which he used chorus to illustrate his central thematic ideas. He carries over some of that technique into this score, which heightens the music to more of an epic approach.

Another favorite cue of mine is "Hunter." This track is kind of a cousin to "Apocalypse" in the sense that there is a male and female chorus countering each other with verses. Again, the voices are undermined by a percussive rhythm. Strings are also utilized and create more of an operatic emotion. In "47 Attacks," the orchestra briefly picks up the pace presenting a serviceable action cue. "Action in Paris" also includes some cool choral arrangements over brass and fast strings.

Fans of Kyd\'s electronic work need not worry - there are plenty of rhythms and beats that accompany the orchestral palette. "Nighttime in New Orleans" is an interesting electronic ambient piece that progresses into a faster rhythm with sampled voices weaving in and out. "Vegas" is more of an upbeat electronic piece that is highly enjoyable yet pensive. "Club Heaven" features some pretty standard \'nightclub\' techno while "Rocky Mountains" contains some strange, yet fun, electronic elements. The album closes with "Main Title" which is a great hybrid of orchestra and electronic.

The album does have a few shortcomings though. A lot of it is, at times, wall-to-wall music, accompanying 47 as his sneaks his way through the various stages within the game I\'d imagine. Every so often, an interesting "ambient" cue will show up ("Amb Zone"). However, I find that the more I listen to the album, the more enjoyable it becomes. One thing is certain: Jesper Kyd\'s talent far exceeds the video game genre and with a Hitman film in the works, hopefully producers will remember his name.