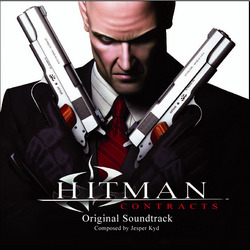 Video game composer extraordinaire Jesper Kyd is at it again with Hitman: Contracts. Kyd's score for the second Hitman game (Hitman 2: Silent Assassin) was an extremely entertaining listen which utilized full orchestra and amazing choral writing. I'm even humming the main theme as I write this. Half of the Hitman 2 album was orchestral and the other half was techno/electronic/ambient. The latter half wasn't that great and what ultimately saves it is the fun orchestral portion.

The problem with Hitman: Contracts is that there is no orchestral material at all. In this entry of the Hitman series, Kyd went fully electronic. So the whole album is akin to the subpar material on the Hitman 2 score - this album is basically a trance remix disc. The album opens with "White Room & Main Title" and it's the only track on the disc that is noteworthy. The electronic loops are interesting and Kyd uses some orchestral string samples that would make Hans Zimmer proud. However, some of the tracks are too long and get old really fast due to repetitiveness. There are also some distracting sound effects thrown into the mix. I don't care about the cop sirens on this level; I want to listen to the music!

This score is made for days where you just have something playing in the background that isn't being paid attention to or to put you in a relaxing trance. If you're a fan of electronic music, I would recommend it. But I feel that Jesper Kyd had a great musical repartee with Hitman 2 and he should have built upon his orchestral styling.