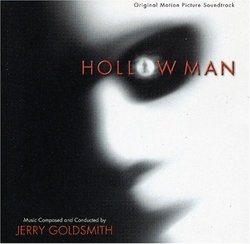 The last time Jerry Goldsmith and Paul Verhoeven teamed up, it was for the 1992 hit Basic Instinct, for which Goldsmith received an Academy Award nomination, as well as a Golden Globe nomination for best score. Now the two have re-teamed for the science fiction hit Hollow Man. Sebastian (Kevin Bacon) is a government research scientist who (along with his team) has successfully created a formula for invisibility (through "quantum phase shifting"). Unfortunately, they need to find a way to make one visible again, and when they finally do, Sebastian decides to move on to the next phase of the experiment: a human test subject, himself. The film tries (half-heartedly) to ask the question, "What would you do if no one could see you?" There was a cut rape scene that if kept in might have explained Sebastian's psychosis a bit better, but towards the end of the film, it degraded into "I'm an invisible man and I'm going to hunt you down".

The main title theme ("The Hollow Man") is a rather eerie relaxing suspenseful cue, with a very hummable main theme that reminds me a bit of Basic Instinct with a touch of The Haunting tossed in for good measure. The use of a pulsing synth as the backdrop for this cue works exceptionally well in setting the tone of the film. The clean technical edge accentuates the sterility of the laboratory setting, and the strings add just a touch of necessary warmth. The excitement of scientific discovery is evident in "Isabelle Comes Back", where the team successfully brings an invisible gorilla back to a visible state. The tense strings and dramatic horn flares remind me a bit of some moments in Innerspace, and the similarities between the films make me wonder if this was an intentional choice on Goldsmith's part.

There is only one "romantic" cue in the film, ("Linda & Sebastian"), but since there is no actual romance (just a past history between the two characters), the soft strings and piano appropriately move into the sterile main theme towards the end of the cue. The musical cue where the now invisible Sebastian injects himself with the visibility formula ("Not Right") is a harsh tense cue with underscores the pain that Sebastian is going through, and the frantic emotions of the team as they try to figure out what's going wrong.

Most of the rest of the score contains suspenseful action cues, where Goldsmith (true to form) does everything just right to underscore the images on screen. In "The Elevator" and "The Big Climb", the climax of the film, Goldsmith employs a cascading synth effect to help accentuate that the elevator is falling. Slightly cliché, but I didn't notice it in the film - probably because I was paying more attention to the visual effects than the score at the time.

Goldsmith hasn't done anything truly groundbreaking for this score - he does what he normally tends to do - provide a highly effective film score that is enjoyable to listen to on CD. But need you rush out right now and buy it? Probably not. Running about 50-minutes long, it contains a nice hefty selection of music. But you might be better off getting Total Recall and Basic Instinct if you want to hear how two truly excellent Goldsmith/Verhoeven collaborations work.