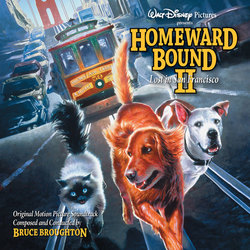 For the 1996 Disney sequel, Homeward Bound II: Lost in San Francisco, the urban setting brought fresh challenges for composer Bruce Broughton, whose score for the previous film had been tailored to its grand vistas and bucolic charms.

The Walt Disney label issued a CD containing 35 minutes of selections at the time of the film's release in 1996. That album represented roughly half of the finished score. While it was a rewarding blend of important highlights, the album necessarily omitted many important cues, all of which have been restored in this expanded Intrada release. A highlight of this restoration is the exciting action sequence at the airport when the familiar pet trio breaks loose from their travel cages and makes their desperate escape across the flight deck, a terrific group of three connected cues, none of which were previously available. Courtesy the Walt Disney Company, this Intrada CD is presented from all-new digital mixes created from the original 2" 24-track recording session masters made by Armin Steiner at Paramount Pictures Scoring Stage M in February 1996.