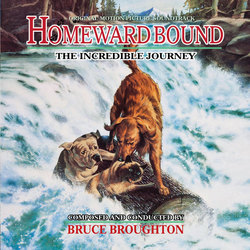 Intrada's latest installment of music from the Disney catalog is an expanded re-issue from the 1993 film Homeward Bound: The Incredible Journey, more than doubling the length of the original release that just ran 30 minutes. Composer Bruce Broughton's skill at underscoring action and emotion are on display throughout the film's lengthy score, a particular challenge in this case since the main characters are household pets. He introduces these protagonists with his opening, comic flourishes, and underscores their relationship with the family and their contrasting points of view.

Homeward Bound is comprised of four basic themes, three of which are introduced in the main title. The opening guitar represents the narrating pup, Chance, and is followed almost immediately by a sweet sustained theme in the strings which is associated with the human family the animals live with. After a brief (and typical) interruption by Chance's theme, the violins briefly play Sassy the Cat's theme. It is not until "The Journey Begins" that we hear the broad and heroic main theme associated with Shadow, the older dog, and with the adventure itself.