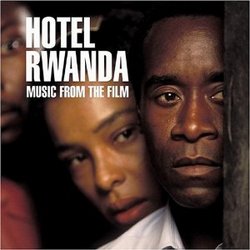 The Hotel Rwanda soundtrack is surprisingly upbeat for the material it covers. If you listened to this disc without knowing any track names you'd be hard pressed to guess it was the musical accompaniment for one of the worst genocides in modern history. You could understand if the music selected had been more like all-The Cure, all-the time to drill home the point of the horrors present. Instead, the generally positive beats and voices contribute an eerie, sinister presence to the entire project. The terror isn't so much in the music as it is in our knowledge of what the music presages or accompanies. This juxtaposition is exemplified in the Golden Globe nominated song "Million Voices" former-Fugee Wyclef Jean: a chorus of children glibly chant in the background as Jean sings in a Bob Marley-esque cant, "They say a man is judged according to his works, so tell me Africa what you're worth."

The first truly dark note is signaled in track four, one of two excerpts from Rupert Gregson-Williams' score, "Interhamwe Attack". It feels a bit overproduced and over-complex in comparison to the rest of the tracks on the disc but the percussive pessimism sets a tone that makes a distinct, and necessary, I think, contrast to the majority of other tracks. (It also seems like I heard this same exact track while playing Price of Persia: Sands of Time.) It is followed up immediately by Deborah Cox's lament "Nobody Cares", the most "American" track on the disc which feels too saccharine. It encapsulates everything that was wrong with the world's response to Rwanda. Cox can, a decade after the genocide, sing "Please won't you show some empathy" while during the genocide itself she was busy recording her pop-soul self-titled debut album with the usual songs about wandering boyfriends - "Who Do U Love", "Call Me", "My First Night With You". Cox isn't any different from the rest of us but it gives her seemingly earnest singing a dark undertone, one which is unintended, I think, and makes the song itself ring hollow.

The following track, "Umqombothi (African Beer)", is a welcome return to more African beats and less plaintive songmistressing. Apparently even in the aftermath of the Interhamwe attack beer can make us happy and dance - "Everybody come and drink my magic beer." One hopes it isn't Hutu Jonestown Beer. The indefatigable ebullience of the track wears down the tireless cynicism of even this reviewer.

The remaining tracks continue the practice of generally neutral music being given ominous titles - "The Road to Exile", "The Journey to Europe", "Don't Leave My Here By Myself", "Children Found". It's a bit like a musical Rorschach test where what you hear says more about you than anything inherent in the music. Or maybe that's just a function of not being able to understand the lyrics on most of the tracks. Maybe the singer on "Olugeno Lw'e Bulaya" is actually describing children's limbs being hacked off by machetes as they cry for their parents to save them.

The closing track, "Icyibo", is a wonderfully simple and poignant one that features nothing more than the happy singing of a handful of children. Despite the best efforts of man's inhumanity to man, hope and forgiveness seem as hard to extinguish as mankind itself.

Hotel Rwanda does an excellent job of presenting "Music From the Film" that subtly suits the on-screen action while still being compelling in its own right as music that is both varied and compelling.