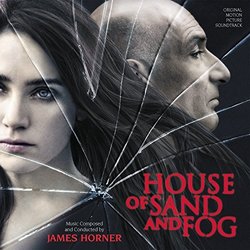 House of Sand and Fog

Review: House of Sand and Fog

Heavy. When I read the book, that's what I felt. Same thing when I read the screenplay and when I watched the movie. Debuting director Vadim Perelman's adaptation of the Andre Dubus' novel is made to be an "Oscar Movie". Serious, important and as I have said, heavy. It is rare that you get a premise to a movie that is an out and out tragedy. James Horner gives Perelman want he needs for a movie whose star is the powerhouse acting of Ben Kingsley and the powder-keg premise of two house owners who equally deserve the property they are fighting over with their lives over. It works very well in context of the film.

I look at the CD cover and it reads "James Horner", but I listen to the CD and I hear a "subdued Thomas Newman." Horner stays away from using a lot of brass here. There's an emphasis on the piano to drive the theme with strong melancholy support from the strings and some quirky synth and percussion accompaniment (in "Behrani's Thoughts - Long Ago"," "This Is No Longer Your House", "Old Photos. New Memories" and others).  There's also plenty of Horner on the album.  His "serious" strings in "The Waves of the Caspian Sea", his "heavy" gongs in "The Waves Of The Caspian Sea" and his slow building melancholy suites in "We Have Traveled So Far, It Is Time To Return To Our Path".

I've been generally cold on Horner's music since 1995, which for me was his last good year of composing (with Braveheart, Apollo 13 and Casper) and anything I like of his afterwards is because it reminds me of a better score he already did. In all honestly, that fact clearly colors this review. What one should take in consideration is, "are you a Horner fan?" If the answer is plainly yes, then get this album. This is a better than average score for him, more restrained than usual and shows development for him (even if it is co-opting year another person's influence). The orchestration is, typically, lush and full. This is clearly the type of craftsman "important" score that gets nominated for Oscars (which this score already has).