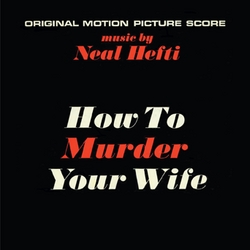 How To Murder Your Wife / Lord Love A Duck

Kritzerland is proud to offer a two CD set featuring the original motion picture soundtracks from two 1960s comedies, How To Murder Your Wife and Lord Love A Duck, music composed and conducted by Neal Hefti, including the world premiere release of Wife's original film tracks.

For How To Murder Your Wife, Hefti wrote one of his most sublime scores, one filled with one incredibly catchy theme after another, and for Lord Love A Duck he wrote a fun and funky score that perfectly captures the whole mid-1960s Southern California scene perfectly.

How To Murder Your Wife was previously released on CD as part of a very big and very expensive box set called The MGM Soundtrack Treasury from Film Score Monthly—that set sold out very quickly, so for people who missed it, or may have wanted only one or two scores, it was a lost opportunity. Therefore, we're very pleased to bring out this single release of Wife, coupled with the CD premiere of Lord Love A Duck. Wife receives a brand new, fresh transfer from the original stereo album master, and Duck has been mastered from its stereo album master.

But the big news is our discovery of Wife's original film score tracks. The album version was a re-recording, much in the style of what Henry Mancini was doing back then—the film's themes, but in more pop-oriented versions and which were nowhere near as good as the original film tracks. Recorded in mono, all the film tracks, believed to have been lost to time, actually survived in excellent sound and we are thrilled to present the entire original film soundtrack on one CD and the album presentation and Lord Love A Duck on a second CD.

Hearing those original score tracks will be a revelation and goes to prove that Neal Hefti was an amazing and unique film composer.