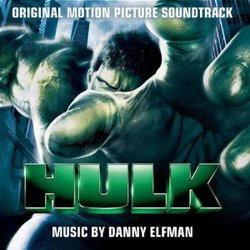 Well, I suppose the cliché is correct; the third time really is the charm.  I initially sat down and listened to Danny Elfman's provocative Hulk score (Yes, "the" has been dropped from in front of Hulk much like "the" is occasionally added back in front of Batman.  It is all so confusing) before seeing the movie and was intrigued but disappointed.  I chalked up my feelings to Elfman's being rushed in composing the score after composer Mychael Danna, director Ang Lee's original choice for the movie, was dropped from the project in late spring.  The score felt disjointed and the themes undeveloped.  All logical flow seemed absent.  A negative review praising Elfman's noble efforts would have resulted if I had ceased my encounter with Hulk then and there.

After experiencing the film, I came back to the score with fresh ears.  Natacha Atlas's admirably rendered Middle-Eastern vocals at first seemed incongruous and so far outside Elfman's current style that I thought them a compromise between composer and director, perhaps even a hold-over from Danna's work.  However, I now recognized them as evocative of the desert which haunts the movie's physical and psychological landscape.  The sudden stylistic shifts were now melded with the split-screen images they were meant to accompany.  While not a completely successful independent listening experience, I was prepared to applaud Elfman for complementing the movie so expertly.

By my third in-depth listen to the score, I finally heard Hulk as Elfman's best score since Planet of the Apes.  In it he has realized a fusion between his long-time passion for eclectic instrumentation (the composer has built his own instruments and admires Harry Partch) with the demands of depicting on-screen action.  Tuvan throat singing, Middle-Eastern percussion, and the duduk mingle with a traditional orchestra, heavy brass, and synthesized effects creating a mélange similar to the genetic and radioactive concoction that is the Hulk.

The "Main Titles" demonstrate this mixture as well as the sudden shifts that mark the score's flow.  The cue opens with a low, rumbling throat singing accompanied by strings.  The ensemble grows in dynamic over thirty seconds until the main theme of the movie appears.  This theme, barely developed beyond textural alterations, consists of a series of six falling cluster chords and is presented here in a flute choir juxtaposed against a rising trumpet line.  A benign and oddly hopeful theme, it is replaced a minute later by elaborately synthesized percussion, brass, and the overtone whistling of throat singing as the action shifts to Dr. Banner's genetic experiments.  The music, with its wild swings between strings and brass, comprises the majority of the cue and similar patterns later re-appear in "Hulk Out!" and "...Making Me Angry" as our young hero shifts into his green alter-ego.  Three minutes in the six-note theme reappears as a relentless ostinato moving steadily higher through standard orchestration until it is allowed to fade, segueing into the "Prologue."

Two other tracks deserve mention for their impact independent of the film.  "Captured" elegantly combines North African percussive patterns and vocals with a steady synthetic beat, brass hits, and string swells in a style vaguely reminiscent of Rai.  "The Truth Revealed" is one of Elfman's most hauntingly beautiful cues.  The opening duduk melody (which contains hints of a minor key Bruder Martin as in Mahler's Symphony No. 1) merges with Atlas's wailing vocals to poignantly depict Bruce's re-awakened memories.  It is a powerful piece of scoring.

So evidently some clichés have merit.  Elfman's Hulk, a late replacement for Mychael Danna's work, had many film score enthusiasts worried about the outcome.  But rest assured that while it is a different sort of score for a different sort of comic book movie, it is also a challenging and rewarding listening experience.  And maybe now I'll stop judging a book by its cover and actually read a romance novel.