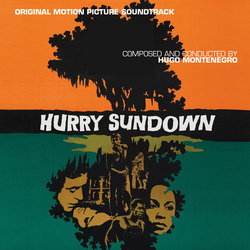 For composer Hugo Montenegro, composing the score for the 1967 Otto Preminger film Hurry Sundown was his first assignment for a major Hollywood director. Montenegro spent three months on location, later crediting the director with helping teach him how "not to Mickey Mouse a film score" and how to avoid placing musical emphasis in the wrong places.

A passionate, dramatic work, Montenegro makes strong use of the ravishing love theme for Lou (Faye Dunaway) and Rad (John Phillip Law). While a lush, stirring orchestral score in general, Jazz also plays a major role in the music, including the score's longest sequence, "Playing With Dynamite," which runs nearly 11 minutes. Intrada presents the complete score, including the original RCA album assembly on this premiere 2-CD set, featuring nearly 2 hours and twenty minutes of music.

To present this expanded edition of Hurry Sundown, Intrada transferred the 35mm multi-channel scoring session masters, courtesy Paramount Pictures. The release includes the "roadshow" intermission music and exit pieces as well as music Montenegro recorded for the three-plus hour version of the film that is being heard for the first time. Because of the large number of cues recorded and the many channels of multi-track stereo music involved, Intrada had to mix and edit some 42 rolls of magnetic film. Incredibly, every roll survived in magnificent condition, yielding one of the most dynamic stereo presentations of film music ever drawn from the '60s.