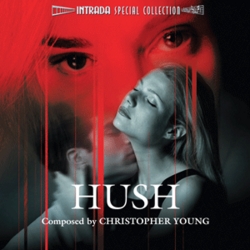 An undeniable highlight of TriStar's 1998 film Hush is its romantic/thriller score by Christopher Young. The composer was already considered a master at suspense and had most recently scored several films in this vein immediately before.

A lullaby opens the score in music box fashion, featuring gentle harp outline before blossoming into a lush, string-led statement of the theme before transforming into the score's love theme and anchor—a career highlight for Young. The action moments in the film are scored with an energetic, thrilling theme in which punchy, syncopated notes chase downward spiraling strings. The score is a well-rounded mix of traditional romance, suspense, and action and ranks as one of Young's finest scores for this genre.

For this release, Intrada had access to the digital masters and Christopher Young crafted the order and flow of this album, each track (with titles inspired by words of the central lullaby) advancing roughly in film order to create a dramatic listening experience.