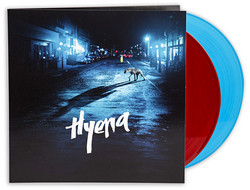 Death Waltz Recording Company are proud to bring you a modern classic from one of Britain's most revered bands. Directed by Gerard Johnson, Hyena is a breakneck thriller dealing with Police corruption in West London with an incredibly atmospheric score by The The (AKA Matt Johnson) that gives the film an evocative soundtrack that weaves between seduction and horror.

The score to Hyena comes across like a fever dream; vignettes of hip-hop and house beats with incredible synthesizer melodies laid on top, threatening electronic effects roaring like a Formula 1 car engine, even choral sections with haunted vocals that show the inevitable influence of Vangelis. Instrumentation is eclectic, with electric and acoustic guitars creating anticipation and dissonance while steel drums and Eastern strings subconsciously illustrate the diversity of the area. Similarly, Hyena combines its musical influences to produce a score that reflects the danger of the main character's situation but also the exhilaration.

140g Double album housed inside a 425 gsm leather look sleeve containing one red disc and one blue disc with an etching on side 4, also comes with full colour booklet and an exclusive lobby card.

One off pressing on red and blue vinyl strictly ltd to 1000 copies.