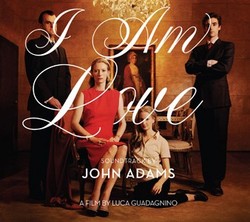 Several of John Adams's works surge with new life as the score to the Italian film I Am Love, which was directed and produced with Adams's music in mind. The New York Times calls the film, directed by Luca Guadagnino and starring Tilda Swinton, "a cinematic tour de force"; the Times of London gives it five stars, noting its "sublime score." The BBC calls the album "one of those rare soundtracks that merits—and rewards—repeated listening."