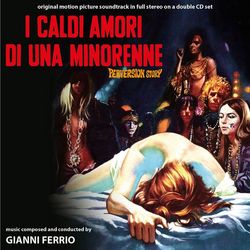 Digitmovies is pleased to release, for the first time on CD (in full stereo), the OST by Gianni Ferrio for the murder-mystery film I caldi amori di una minorenne.

In this OST we have a mix of string passages which change from romantic to melancholic, psychedelic and jazz motifs, and a lot of upbeat lounge music both instrumental and with vocals performed by the Cantori Moderni of Alessandroni.

At that time, C.A.M had released a stereo LP (SAG 9021) containing 18 tracks selected and edited by the composer for listening purposes (31:56min). Out of respect for Ferrio, we decided to leave the edited version from the original LP on CD 1 and on CD 2 we put all the music from the original master tapes as they were recorded for the film, including the alternative takes (102 min). This is a real treat for fans of 70s music.