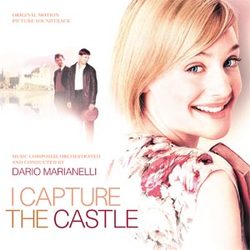 I Capture the Castle

Review: I Capture the Castle

Among Dario Marianelli\'s many musical gifts is his ability to give voice to the aches and flutters of the human heart. There\'s a palpable sense of longing about his score for I Capture the Castle - a sense of waiting for something that never comes - and it\'s a feeling that\'s central to this film about a young woman\'s struggle to figure out what love is. While this means that I Capture the Castle has a slightly more downbeat edge than Marianelli\'s hugely popular Oscar-nominated score for Pride and Prejudice (2005), it still has moments of sheer elation and heartbreaking tenderness.

The score starts gently with a delicate piano motif introducing the nostalgic tone of the film. A curious echo effect is soon added to suggest the empty, draught-ridden rooms of the titular castle. "As It (Perhaps) Was" builds gradually with a whisper of piano accordion, then becomes more forbidding in the crescendo to a cathartic introductory theme: a rousing passage with layers of busy instrumentation underlying a soaring phrase on high strings. A high point of the album, this opening cue deftly captures the wide-eyed innocence and hopefulness of the young Cassy. It\'s reappearance later in "I Am Going to Stay Here," without the added echo effect, hints that Cassy has come full circle and has renewed hope to take control of her seemingly hopeless situation. It\'s typical of Marianelli\'s well-judged restraint that this theme only has two significant iterations throughout the score.

Marianelli plays around with a vast array of thematic material. A love theme has its first statement in "Heartbreak," its steadily descending motifs evoking Cassy\'s emotional downward spiral. The theme becomes closely associated with the state of Cassy\'s heart, appearing again on "I Knew It Was Love" and "The Pagan Rites" to symbolise her troubled relationship with the conflicted Simon.

The whimsical strains of "Simpsons," "Scotney Hall" and "Fragmentary Consciousness," with their rigidly pompous bass lines and fussy, ornate melodies, cleverly suggest both the wealth and eccentricity of Cassy\'s new circle of friends. Marianelli is similarly playful in "The Bear Hunt," using snare drum to add a militaristic flavour.

A beautiful, melancholy waltz forms the basis of "Life is a Beach," featuring the apparently signature combination of piano, clarinet and piano accordion. The waltz reappears later on "I Am Going to Stay Here" and "Cassy Takes Off" to suggest Cassy\'s thwarted independence. Marianelli also uses a more languorous waltz in "Cassy Daydreams" - a standout track highlighting Marianelli\'s use of piano to lend a rich emotional texture to music that would otherwise be merely \'pretty\' - and "Rose\'s First Night," which introduces saxophone to represent the sensuality that Cassy can only fantasise about.

There are moments of darkness too. "Take Him Down" introduces some nightmarish percussion effects, while "Cassy Gets Lost" adopts a frenetic dissonance to underscore the ugliness of Cassy\'s awkward forest dalliance with the housekeeper, Stephen. The end result of this layering of thematic material is rich and expressive music that will please Marianelli\'s fans, though it may not be \'attractive\' enough to draw any new ones.

The inclusion of three non-score tracks adds a new dimension to the listening experience. "The Landsdowne Quickstep" and "You and the Night" are welcome pieces of 1920s dance hall nostalgia but they could have worked more effectively had they been sprinkled amidst the score cues. Marianelli\'s own rendition of Debussy\'s "Clair de Lune," however, is in just the right spot, offering a sparkling conclusion to the album.

The release of the soundtrack nearly four years after the release of the film is thanks to Moviescore Media\'s Discovery Collection, a series aimed at unearthing some overlooked film music gems. That this score was chosen as the first in the series says something about its quality and the growing recognition of Marianelli\'s talent. Its arrival comes not a moment too soon.