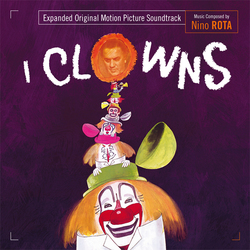 In 1970, Federico Fellini directed one of his most unusual projects - a television movie paying tribute to his obsession with circus performers. His I clowns is part earnest tribute, part mockumentary, part historical footage and part myth building in a crazy, colorful Kaleidoscope of circus madness. I Clowns originally premiered at the Venice Film Festival where it was voted the Best Italian film in August 1970, its actual television and theatrical premiere was on Christmas 1970.

Nino Rota's music builds upon his shared interest in circus with Fellini, building upon circus classics as well as his previous scores like The White Sheik, 8˝ and Juliet of the Spirits. His music is largely orchestrated the brassy world of circus bands, but there are touching, lyrical moments as well for the life stories of the clowns, not to mention the great nostalgic moments that underscore Fellini's early memories of his first circus visit.

The original LP release for I clowns featured dialogue and sound effects in addition to the music organized into two suites. This release by Music Box Records features the complete, chronological underscore on Disc 1 (without dialogue and sound effects), and a recreation of the LP program on Disc 2. Supervised by Claudio Fuiano, this current 2 CD edition has been carefully restored and remastered by Christophe Hénault from the recording session tapes. The booklet by Gergely Hubai discusses the unusual film and score, including its varied influences and chequered release history. This release is limited to 500 units.