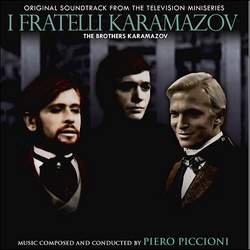 This is the first time this title is released on CD. Selected, restored and digitally remastered by Claudio Fuiano exclusively for Kronos Records; this gorgeous 2CD set carries 52 tracks for a total running time of 137 minutes and is limited to 500 copies.

The score is rich in highly dramatic, epic and melodramatic motifs, which are the perfect score to Sandro Bolchi's TV adaptation of Dostoyevsky's final novel by the same name. This is one of Piero Piccioni's most beautiful and intense works.