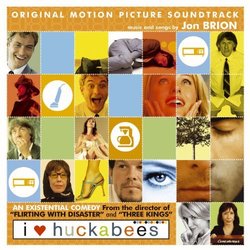 Over the past few years, Jon Brion has slowly become the composer of choice for many indie film-makers. They go to him when they want a quirky, slightly off-kilter sound to underscore the quirky, slightly off-kilter world they are creating onscreen. Brion's name has most often adorned the credits of Paul Thomas Anderson's features such as Magnolia and Punch Drunk Love, but here he adds his signature brand of songs and samples to David O. Russell's exploration of the meaning of life, I Heart Huckabees.

Although I Heart Huckabees's sound is close enough to that of his earlier scores to let you know that Brion is behind the mixing board, he is exploring new/old terrain in this production. Let me explain. Before he moved into film scoring, Brion was best known as the producer behind Aimee Mann, Fiona Apple, and Beck. He helped them achieve their innovative sounds and there are many similarities between his work with those artists and his work here. For instance, many tracks from this album are pop songs that Brion sings: "Knock Yourself Out," a song that encapsulates the struggles depicted in the movie; "Didn't Think It Would Turn Out This Way," an almost power-pop number; and "Revolving Door," among others. Each one has the melancholy lilt that Aimee Mann's best work contains. It is a sound in which you can sense world-weariness combined with a desire, a need, to keep searching for life's meaning. The sound, in short, is perfect for this film.

The non-vocal cues on the score are a mixed bag. Some are delightfully witty, such as the way "Strange Bath" is almost a tango or "Heckabee's Jingle (50's version)" flirts with "Bye, Bye, Blackbird." Some seem to stagnate and go nowhere, such as "JB’s Blues." The main theme, or at least the recurring music that functions as a main theme, is a lovely tune that first appears in "Monday." It is a waltz that in instrumentation and disposition could have walked right out of the 1970s and is clearly related to Punch Drunk Love's main theme. By the time it returns in "Later Monday," the tune's character has changed much like the character onscreen. The instrumentation is deeper, darker, and by the cue's end, it has grown in instrumentation to include whistles and a choir that intones "nothingness, somethingness, nothingness." When the theme makes its last appearance in "Monday (End Credits)," it has returned to the inquisitive sound of the opening with a new depth in instrumentation. The transformation of this one cue shows why Brion keeps being used by a few directors – he is able to penetrate musically to the film's heart in through unconventional means.

Unfortunately, many of the cues go off in strange tangents, much the same way the film does. These tangents are delightful in their own right, exploring interesting corners of the sonic spectrum, but when played in sequence they do not have the cohesion you might expect. Still, that is a small complaint when compared against the joys this score offers. Brion continues to explore new ground in film scoring and I, for one, am enjoying the trip.