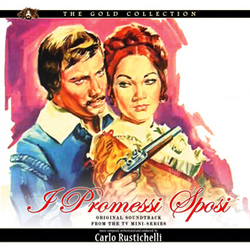 Kronos Records proudly presents for the first time ever on CD and in its complete form Carlo Rustichelli's epic dramatic score for the 1964 television mini-series I promessi sposi (The Bethroted) based on Alessandro Manzoni's historical novel of the same name.

The music was previously only released on a vinyl by CAM the same year the series was aired on television. Kronos Records is proud to present this soundtrack for the first time ever on CD format. The first eighteen tracks of the CD contain the program as featured on the original CAM lp. The rest of the CD contains the rest of the cues as heard in the series and all previously unreleased in any format, courtesy of the C.A.M. vaults.