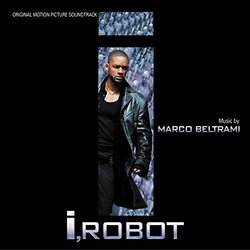 Inspired by the classic Isaac Asimov science fiction stories, I, Robot is a bit of a morality tale disguised as a sci-fi action flick starring Will Smith. Detective Spooner (Smith) had an inherent distrust of robots. Even though the "3 Laws" are designed with a particular logic to prevent a human from being harmed, he's convinced that a robot is behind the suspicious death of Dr. Alfred Lanning (James Cromwell). With the help of scientist Susan Calvin (Bridget Moynahan), Spooner digs deep into the conspiracy and what he discovers might change the course of humanity.

Directed by Alex Proyas (The Crow, Dark City), the film has a nice emotional arc that makes one question what it means to be human. The idea of independent thought and emotions in a robot is explored as Sonny, the robot Spooner believes to be responsible for Lanning's death, turns out not to be all that he appears. Underscoring the film originally was Trevor Jones, who had worked with Proyas on Dark City. However, it wasn't quite working out and he left the project, to be replaced at the 11th hour with Marco Beltrami. In the 15-days Marco had to write his replacement score, he ended up crafting a great score with a solid emotional core.

The ethereal "Main Titles" start out with some stereo percussive effects, before a tremolo string ostinato comes in and slowly builds up a taste of the main theme before ending with a crescendo. Beltrami returns to the tense action scoring he wrote back with Scream in "Gangs of Chicago" and "Tunnel Chase", using pounding brass and strings supported by heavy percussion. But it's the "I, Robot Theme (End Titles)" which showcases the main theme in all of its glory. A solo female voice brings in a strained electric violin with tense string work, which builds to a big version of the theme, a piece that is ominous, emotional and mysterious. It's a great theme, and the nice thing about this score is that it shows up a lot.

I'm not sure where the convention started, but it seems that science fiction is best exemplified through music by using arpeggios. With that in mind, there is no shortage here! "Cityscape" and "Chicago 2035" (the latter which evokes memories of Elliot Goldenthal's Final Fantasy) are filled with them. While we are provided with plenty of action cues on the album, there are quite a few calmer, emotional tracks as well. The main theme is used as emotional underscore in "Spooner Spills" and "Dead Robot Walking", to creepy effect in the film. It all nicely comes together in the big climactic finale, "Spiderbots". Choir and full orchestra blasting away at the main theme which sends chills down my spine. But it's not the end - there's the resolution, in "Round Up", which gives us a second emotional climax.

Overall this is a great album to listen to. Marco has done a wonderful job, coming right off of Hellboy, and so far his scores for 2004 have been some of the best works of his career. With that in mind, I'm eager to hear what he does next. But for now, I think I'll listen to I, Robot one more time.