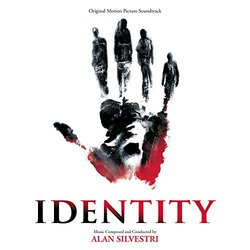 I hold absolutely nothing against Alan Silvestri; the man is obviously a genius.  He did a fine job with his score to Identity because his music works extremely well when heard within the film.  On disc, however, it is a completely different story.  Identity is yet another 30 minute disc provided by Varese Sarabande - and what a boring 30 minutes it is.  The opening track, "Prologue" sets the dark and ominous tone for this thriller and it also provides an appropriate motif that is seldom heard through out the rest of the album.  The music is soft, mainly composed of strings and flutes.  This little motif is pretty much the only thing interesting on this CD.

For much of the album, the orchestra creates a color for the film.  The music is very ambient, which is an excellent way to use music in order to captivate setting and tone, but like I said before, it makes a rather dull listen.  Silvestri occasionally uses electronic elements and loops within the orchestra.  A track I found kind of interesting was "Settling In" which utilizes a blend of unique Arabic-like percussion and string instruments accompanied by electric guitar.  There are only a couple of "jumping" shocker moments on this album in which the music is subtle and then BANG, the orchestra clusters, but not as many of those moments music from this genre generally have. What Lies Beneath had more tension going for it.  "Showdown" has about a minute's worth of action/terror music, but nothing special.

Finally, there is the "End Credits" track in which all the small little themes are brought back along with some dialogue and electronic instruments.  It's a decent little suite and if you get your hands on this track only, you basically have heard everything!  In the end, Identity is bland and boring.  There is nothing exciting about this album.  Hopefully with Lara Croft: Tomb Raider: The Cradle of Life, Alan Silvestri will come up with a score that puts him back on top, where he belongs.