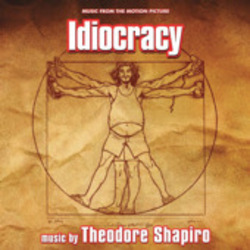 Simply put, it\'s a miracle that Mike Judge\'s film Idiocracy was allowed to have a score release, even as an iTunes exclusive. The sci-fi comedy, which stars Luke Wilson and Saturday Night Live\'s Maya Rudolph, has notoriously received virtually no promotion from 20th Century Fox, the studio that financed it. Apparently, no official trailer, no set of television spots, no website or even a blurb on the Fox Studios website has been provided to publicize the film. Just two official still photos have appeared, and roughly 130 theatres are showing this film that was clearly meant for a wide release.

Thanks to current nefarious corporate shortsightedness that Judge ridiculed in his previous production, the modern cult classic Office Space, most of us will have to wait for the DVD to see Idiocracy. Until then, we at least have the aforementioned official soundtrack, composed by Theodore Shapiro and running just over half an hour. Shapiro has scored an interesting variety of movies in his career so far, from lightweight fare and straight comedies (The Devil Wears Prada, Dodgeball) to more dramatic films (Heist, Girlfight). With Idiocracy, the composer showcases his knack for driving action rhythms and airy melodies, wisely choosing to have his score play it straight for this comedic film.

A light staccato rhythm starts off the opening track, "History of Man/Garbage Avalanche", which is then passed to romantic strings. An militaristic march follows, which introduces an uplifting motif for the protagonist, Joe Bauers. The motif may not be particularly memorable or developed, but when it appears on album, it certainly provides a welcome relief from the bold, frenetic action music that ends this track and comprises most of the album.

"Looking For the Time Machine", "Trouble with the Law", and "Dumb Angry Mobs", all feature the frantic percussion, bombastic brass, rhythmic strings, and tense piano work that typify much of the score, and it\'s all thoroughly menacing, energetic, well-structured and layered action writing. Occasional use of electric guitar and synth round out these tracks for added impact. The highlight action cue, however, is "Death and Roses", which features soaring strings and pounding percussion over furious string ostinatos. It\'s the most consistently inventive and intense cue on the album. By contrast, "Keep Painting" is a moment of pure calm, featuring a pleasant, almost pastoral melody, and "Joe\'s Decision" features rhythmic strings backing a brief heroic statement.

One limiting factor to the album, however, is Shapiro\'s reliance on similar techniques and concepts throughout some of the tracks. "Supreme Flames" and "President Joe Bauers", for example, mostly offer more of the same in terms of action music and the relaxed, melodic writing. While some passages in these cues may not be as inspired as others, the music is still enjoyable to listen to. Amusingly, the album finishes with the brief "Right Bicep", an intentionally repetitive and abrasive techno song that most likely is a source cue.

Although somewhat limited in range, the album for Idiocracy nevertheless balances solid action writing with enough gentler moments. Despite the fact that it\'s meant for a comic film, Shapiro has delivered a score to be taken seriously, and both frequent collectors of soundtracks and casual listeners can reap the rewards.