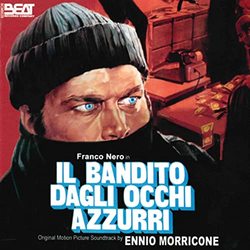 A movie released in 1980 on the long crime genre trail that was very prolific in the previous decade, Il bandito dagli occhi azzurri was directed by Alfredo Giannetti and starred Franco Nero, Dalila Di Lazzaro and Fabrizio Bentivoglio. A very rare film and a very rare score, the music was composed by honorary Academy Award-winner Ennio Morricone, one of the most popular musicians of our times.

The movie is based on a complex script with many twists and surprises involving a dangerous bandit, Fabrizio Bentivoglio, and his enemy, Franco Nero, in his classic role of the commissioner. Once again, the Maestro created astonishing sonorities, taking some jazz keys that we could frame into the ''Take Five'' ambience, just to bring to closure a score that does not delude punctually. With more than 49 minutes of great music including 8 never-before-released cues, it's a blue-eyed score as you've never heard it before!

The CD is packaged in a jewel case with a 12-pages booklet, with liner notes on the movie and score and an in-depth biography on Franco Nero by Fabio Babini. Limited edition!