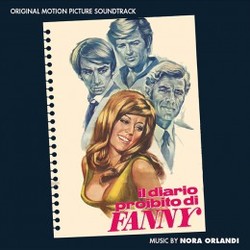 Written and directed by Sergio Pastore in 1969, Il diario proibito di Fanny is an anthology film starring Giovanna Lenzi as four different women, all named Fanny. The film touches upon all the hot-button issues of 1968: illegal immigrants from the Eastern bloc, the Prague Spring, the Italian star cult and even abortion.

The score composed by Nora Orlandi follows the movie's main gimmick. Since all four characters are played by the same actress, Orlandi uses only a handful of motives and dresses them up in different disguises ranging from the fun fair ("Luna Park") to a casual dance number ("Fox Trot") and even a waltz performed by the composer herself ("Valzerino con voce").

Beautifully orchestrated and conducted by Robby Poitevin, this score only had a single release. Our CD presents the entire score for the first time, mastered by Claudio Fuiano from the stereo master tapes vaulted in mint conditions at Gruppo Sugar. The 8-page liner notes by Gergely Hubai discuss the film, the composer and the score.