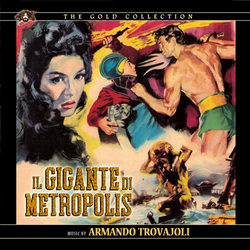 Kronos Records is proud to release for the first time ever in any format the CD soundtrack for Il Gigante Di Metropolis. The film was a unique hybrid of 2 genres very popular at the time, Peplum and Sci-Fi. Whereas the second is not as evident as the first once can still definitely call the film a hybrid of the two. The music has definitely played a major role in putting the sci-fi element under a stronger light. The music for this unique film was composed by Italian legendary composer Maestro Armando Trovajoli.

Our fourteenth title in The Gold Collection is a must for all fans of Trovajoli, the PEPLUM and SCi-FI sound of the 60's and 70's and the immortal music of the Golden and Silver Age of Cinema.