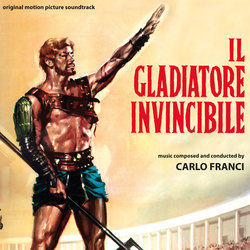 Carlo Franci wrote a symphonic score to describe the heroic endeavours, where dramatic and violent passages for the battle scenes are alternated with a romantic and nostalgic love theme which is gloriously reprised in the finale. Maestro Franci used a symphonic orchestra, dominated by powerful French horns. For the realization of our CD (total running time 68:48 minutes) we used the mono master tapes of the recording session which took place over half a century ago and have been kept in good condition until now.