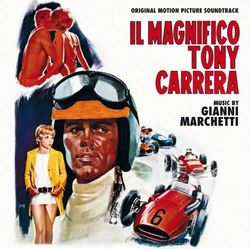 Like most of these Eurospy films, Marchetti's music for Il magnifico Tony Carrera treads a careful line between overblown comedy satirizing the globetrotting and womanizing aspects of James Bond films, while it also aims to have a few legitimately tense scenes (such as breaking into the NATO building). The main theme for Tony has a cowboy twang with a memorable guitar theme and the occasional whistling lending an Italo-Western feel to the whole adventure.

This release marks the expanded CD premiere of the score—previous CAM LP issue are highly sought after collectibles. Mastered by Claudio Fuiano from first generation master tapes, courtesy by Sugar Music. 8-page liner notes by Gergely Hubai discuss the film, the composer and the score.