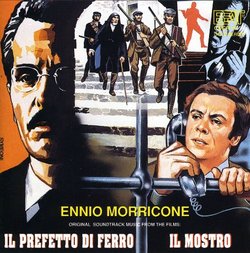 Il prefetto di Ferro and Il Mostro, two exellent 1977 compositions by Ennio Morricone which were originally released on vynil, have been re-issued on CD. This re-issue is a fitting tribute to two soundtracks which first appeared separately.

This re-issue supplies a more complete portrait of Morricone. Today's technology enables the listener to appreciate with greater clarity the mediterranean sounds of Pasquale Squitieri's "Il prefetto di Ferro" which are sometimes warm and at others harsh but are sounds which unmistakably remind the listener that the composer draws from an intimate knowledge of the folk music of the region. "La ballata del Prefetto Mori" stands out as a song of great sadness but also as a denunciation of a historical and social tragedy which occurred in the Italian province of Sicily and which is still being enacted today.

For Il Mostro, Morricone's treatment of this tragic tale of death and misunderstanding is masterly—he embues the music with tension and suspense through intentionally chaotic writing for the brass and percussion but does not allow it to destroy some beautiful and melancholy moments in the score.