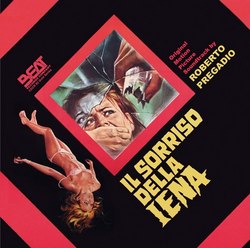 We had given up. The multi tracks masters of the score Il sorriso della iena were incomplete and, even if announced 4 years ago (!!!) this great score composed by Roberto Pregadio for the movie directed by Silvio Amadio in 1972 seemed to be a dream. But recently we accidentally found 3 1/4" unlabeled masters in mint condition belonging to this wonderful score by the popular composer.

An artwork ready since 2008, liner notes and so on have been quickly recovered from our hard drives and so, now we can say it's available. One of the most rare scores by Roberto Pregadio, composed for a thriller with a very good cast including Jenny Tamburi, Rosalba Neri and Silvano Tranquilli.

The only available cue up to now was a sequence of the score released in the past through some compilations. Now the complete edition, fully restored and remastered by Enrico De Gemini for the total time of 66'04''!

The CD comes in jewelbox edition with a 8 pages booklet, original artwork edited by Daniele De Gemini and liner notes by Fabio Babini. A real gem for the Maestro fans, for soundtrack lovers and collectors. A very good score for a psychological movie which will prove to be a good choice for your listening experience!