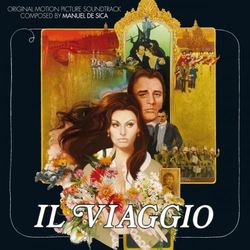 A Place for Lovers features Manuel De Sica's first ever score, and include a theme song performed by the incomparable Ella Fitzgerald. A smooth underscore, A Place for Lovers is not just a beautiful score, it's also a well-crafted jazz album filled with a great love theme and some funky source cues for the high-end parties.

The Voyage was Vittorio De Sica's last film; it stars Sophia Loren and Richard Burton as star-crossed lovers who can't get married due to the rigid laws of Southern Italy. The couples trip through Italy is presented through breath-taking images as well as a sweeping, romantic score characterized by variations of a love theme and a lovely secondary material for Loren's mournful first marriage. The score program also includes source music arranged by conductor Alessandro Blonksteiner, and a theme song performed by Jerry Vale.

Mastered by Claudio Fuiano, the only surviving material from A Place for Lovers was only released before as part of Manuel De Sica compilation released by DRG Records in the mid-nineties, but this marks the first occasion the Ella Fitzgerald theme song is added to the program. The Voyage had prior LP and CD release by CAM, but this edition adds the complete score in addition to the album program, including newly discovered material. The 12-page package includes liner notes by Gergely Hubai discuss the works of the De Sica father and son team in addition to the films and the scores.