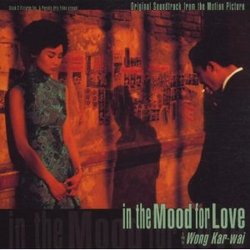 In the Mood for Love

Review: In The Mood For Love

Wong Kar-wai's In the Mood for Love is a languid, sometimes ponderous work that surprises as it develops into a truly moving, thought-provoking piece. It is a meditation on the nature of true love and the amazingly simple social boundaries that stand in the way of that love. The lush visuals and striking soundtrack create an atmosphere that draws you in and keeps you interested, despite the unfocused storyline.

Tony Leung and Maggie Cheung play two neighbors who learn that their spouses are having an affair; as Leung and Cheung seek solace in each other, their passion for each other grows and develops. But in the spirit of any great love story, this love is not meant to be and is hindered by nothing more than the quiet reserve of each of the characters. The audience watches as these two very likeable characters find true happiness in spending time with each other instead of in their loveless marriages, and it becomes almost unbearable to watch their self-denial and eventual separation. Without giving away too much, the ending shows that both are fully aware of their plight, and know that they had found and missed out on true love, which makes it all the more tragic.

The production design by William Chang and cinematography by Christopher Doyle and Lee Ping-bin help evoke the feeling of a moldy, grimy, but thoroughly intriguing 1960's Hong Kong. The lushness of the imagery draws the audience into this world, making us feel a unique level of empathy with the characters.

Similarly, the soundtrack, with pieces by Michael Galasso, Shigeru Umebayashi, and Nat King Cole, among others, has an equally unique power to draw us into the story by creating a rich, haunting atmosphere. Wong uses a string motif by Umebayashi over and over to convey the unhappy daily grind experienced by Leung's and Cheung's characters. You hear the strings being plucked as Cheung repeatedly does the familiar walk to get soup from her local street vendor, alone, and after witnessing this scene a few times, you truly feel what a sad existence hers is. Though this repetition is effective, where the soundtrack really shines through is at the end. After years of separation from Cheung, journalist Leung visits a temple in Cambodia and has a cathartic, though tragic, experience.

At first glance, a sad score mixed with exotic images of Southeast Asia seems too easy a way to present a spiritual change, but the combination of Wong's images and Galasso's "Angkor Wat Theme" is almost devastating in its power and is undeniably effective. A bonus track on the CD soundtrack, "Casanova's Flute," though not quite as powerful, is still a gem that proves Galasso's ability to strike a deep visceral chord with the listener.

The soundtrack can easily be criticized. It is not a unified work. The source music is all over the map, from Nat King Cole to random Chinese tunes. But this variety is also its strength. Wong is trying to convey the eclectic nature of the place his characters inhabit. Also, upon first viewing, the string motif becomes a little annoying as it plays over and over and over. But it ultimately works, because it effectively conveys the redundancy and melancholy of the characters' existence. The soundtrack does what any score should do, serve the needs of the film by enhancing it and not overpowering it.

The soundtrack became available in the U.S. only recently. I would recommend it strongly to fans of the film, of Michael Galasso, or of Wong Kar-wai. To the non-fan, it will seem disjointed, but to those who are fans, or those who simply want a varied, multicultural musical experience, this soundtrack is well worth it. If you're really adventurous or really in the mood for In the Mood for Love, check out the import version with additional tracks.

For listeners who want an additional Galasso fix, they should check out Scenes, a CD done in 1982, in which one can hear pieces with remote connections with this soundtrack.