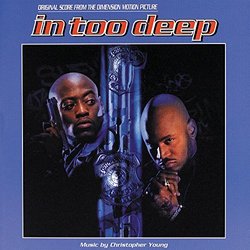 In Too Deep - Original Score

Review: In Too Deep

Christopher Young's score to In Too Deep is a rather interesting mix of dark orchestra, percussion, and jazz with a hip-hop edge. The film is about an undercover police officer that might be getting a little too involved in the underworld that he's investigating. The main title of the film contains some solo trumpet and piano bits that are smoothly performed by Sal Marquez and Kenneth Burgomaster (respectively). There are a lot of tense atmospherics in this score, accentuated with synth percussion, which works very well to draw out the tension.

If one were to remove all of the synth percussion from this album, they would be left with a very somber orchestral score that (at times) reminded me of some moments of Hush. Some of the more notable cues include "Bust", "Slam Guru", "Missing Vocal", and "Thank Not". This album was released by Varese Sarabande, and runs a little over 35 minutes long. But it is a satisfying listen, and I don't feel that any more music would have been necessary.

In Too Deep wasn't in theaters for very long, and it got mixed reviews. But in the recent trend of "film scores being better than the film they appear in", Christopher Young's work was surprising good, and I'm sure that it overcame the film - even though I didn't get a chance to see it.