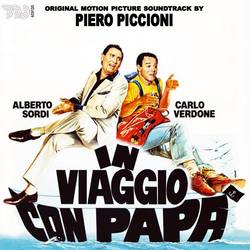 In viaggio con papa (1982) is one of the winning comedies of the early '80s, with the great Alberto Sordi in the role of the father and Carlo Verdone as the son. Without a doubt, the other protagonist is the sparkling score by the legendary Piero Piccioni, a musician much admired by the Roman actor/director.

The score by Piccioni is characterized by funky tunes through which the author creates and develops one of his most famous themes, alternating elegant bossa nova and lounge cues with extremely romantic orchestral tracks. At the time speaking, a 45rpm (GM 30005) was released as well as an LP (General Music 30704) with thirteen selections. In 2004, the soundtrack was released for the first time on CD—an expanded version by GDM Music in joint venture with Digitmovies (GDM 2043). For that release they utilized a new master assembled by the composer, whose program didn't follow the original LP track list and mixed new stuff with unreleased material.

For this definitive edition we were able to use the first-generation stereo master tapes—preserved in mint condition—which allowed us to rediscover a huge quantity of music that was recorded for the film (only part of which ended up in the movie) along with a host of previously unreleased alternate takes.

This double-CD set includes the original LP program as it was released 30 years ago plus the film version of the score and various alternate takes, surely a boon for all Piccioni and Alberto Sordi aficionados. So, savor all 58 cues of this wonderful soundtrack—148 marvelous minutes in the good company of Piero Piccioni, Alberto Sordi and Carlo Verdone.