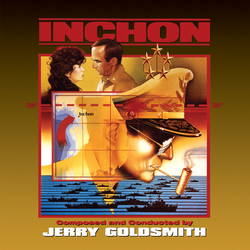 One of Intrada's fastest selling Special Collection titles was Jerry Goldsmith's exotic war score to the 1982 film Inchon. Out of print for seven years, Intrada has reissued its 2-CD set, giving a new audience the chance to experience this early '80s effort packed with action, romance and the exotic sound of the east. This set features the original LP presentation as Goldsmith had initially presented his score, plus a second disc featuring the score in chronological order.

The film may be forgotten, but what lives on is Jerry Goldsmith's dynamic, colorful and percussive score. The score features an augmented percussion section, including snares, bass drum, cymbals, tympani, triangle, xylophone, woodblocks, boo bams, and many others. At the time of the film's release, Goldsmith had artfully assembled a 38-minute album capturing the highlights and delivering an irresistible listening experience. In 1988, Intrada released an expanded edition that featured the complete score, without all the unique assembly of the LP. Now you can listen to both on this unlimited release.