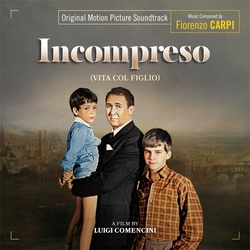 The main goal of Fiorenzo Carpi's score is to fill in for the absent mother with a theme derived from Mozart's Piano Concerto No. 23. The composer's construction of improvising and deriving new cues from Mozart's piano solo makes it possible to signify the loss of the mother through cues that range from the elder son's melancholic rite of passage to to the younger brother's childish horseplay that leads to tragedy. One-off cues include the Victorian style opening credits, a stripped-down percussion cue for the son's judo training and a fun source cue played in a radio shop.

Incompreso (Vita col figlio) had only moderate soundtrack releases timed to the movies premiere. CAM released a 45RPM single with a theme from the film while a few cues from the score have been previously released on the 2005 compilation album Fiorenzo Carpi, Ritratto Di Un Autore. This time the whole score is presented, including alternates and unused cues. 8-page liner notes by Gergely Hubai discuss the film and the score.