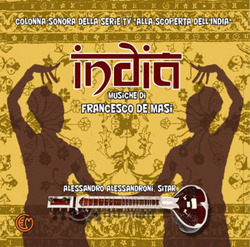 Television's series divided into eight episodes of 60 minutes each, plus an episode summary of 60 minutes entitled: "ATMAN" presented to Italy's Award. This series was produced by italian network RAI TV 1 in 1966; is the story of a long journey in India between past and present and was directed by Folco Quilici in collaboration with the Directors Alfredo Pinelli and Ezio Pecora.

The music's comment, instrumented, directed by Francesco De Masi, had considerable success; for the execution of the songs, included on the soundtrack, were called the best musicians of the time. The soundtrack was played by:The series won the Tv journalism award Italy in 1969. Francesco De Masi was undoubtedly one of the most prolific composers of soundtracks that include such classics as: A Coffin For the Sheriff (1965), Arizona Colt (1966), Seven Winchesters For A Massacre (1967), I go ... I kill Him and I return (1967) and Go, Kill Everybody and Come Back Alone (1968), and then, he can be counted among the most significant composers of soundtracks in the history of Italian cinema in the second half of the twentieth century.