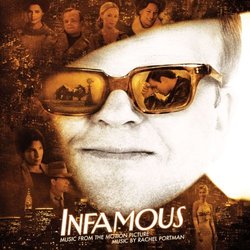 Truman Capote was certainly an intriguing enough individual to warrant several cinematic insights, but the pressure was on this year\'s Infamous in being compared to last year\'s multi-nominated Capote, which covered the same events and featured Philip Seymour Hoffman\'s Oscar winning portrayal of the idiosyncratic writer. Of course, a different set of cast and crew can ably filter the events through different faces and lenses, while in the case of the score, Rachel Portman\'s musical sensibilities draw little comparison to Michael Danna\'s approach. One obvious change is in the presentation of the score on disc. Danna\'s music was still relegated to play beneath dialogue on the Capote album, but at least Portman receives more than half of the running time on the Infamous release.

The album also features a fair number of songs endemic to period and thus opens with a swinging jazz version of "What Is This Thing Called Love", with the Mark Rubin Band backing up the vocals of actress Gwyneth Paltrow. If memory serves, this is the second film in which she has sang and with her voice displaying quite a pleasant tone, it is surprising she has yet to cut a full album herself. "Heartache" follows on its heels, this time with the Mark Rubin Band taking center stage in a 50\'s style jazz instrumental, heavy on the piano, bongos and vibraphone. This continues into the first score cue from Portman, "La Cote Basque", which keeps the same perky flavor but with acoustic guitar and upright bass in a sound somewhat inspired by Django Reinhardt. Another period-centric, innocent rock & roll number is heard in "Broken Hearted Melody", performed by Sarah Vaughan.

A string of short score selections follow, the instrumental colors shifting dramatically to solo oboe and clarinet set against strings in "Truman\'s Mother" and a lonely piano in "Safe Place", but in "Truman Tries Out Lines" returning to the easygoing Reinhardt-esque tempo of "La Cote Basque". After a break for the first of two songs by Johnny Bond, Portman\'s music resumes, led by the lengthy "Perry\'s Story". This is a subtle, pensive piece for clarinet solo backed by a repeating, arpeggiating figure for harp and piano. An oboe hesitantly dominates "Truman and Perry Kiss" while a dark pedal drone anchors the ominous "Clutter Home" and its tragic clarinet and violin duo. The murkier hues bleed into the five minute "Truman Decides To Open Up / The Killings" in which the strings are much weightier in an effective, inexorable climb of regret and tragedy.

Johnny Bond offers his second ditty, breaking the tension, before the final two score cues are presented. "Porn Magazines" returns once more to the infectious style heard in "La Cote Basque" and finally in "Friend Truman / End Titles" Portman initially revisits the thematic material from "Perry\'s Story" before a solo piano recalls the melancholy "Safe Place". This melody is soon joined by small string section as the track then closes with variations on the "Perry\'s Story" material. There are three more vocal selections to cap off the album, the first surprisingly featuring a humble, sweet performance by Daniel Craig, who plays Perry in the film and of course everyone now knows as the new James Bond, and then a lush offering by Dusty Springfield and the 50\'s standard "The Twist" by Hank Ballard.

Overall, the release successfully covers the musical map of the film, from when the understated score highlights the specific drama or culls the sounds from the era to the songs crafted at that time to fully envelop the audience in the time and place of Infamous.