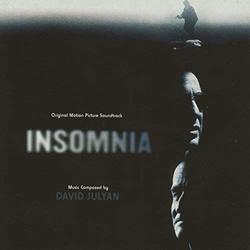 Though based on a fairly limited concept, Insomnia, manages to weave a compelling tale in a rich atmospheric setting.  This sophomore film from Memento director Chris Nolan is enhanced by the moody score by David Julyan.

Insomnia tells the story of a disenchanted, famous detective, played by Al Pacino, who comes to a tiny Alaska village to help solve the brutal murder of a teenage girl.  Troubled by recent scandals back home in L.A., Pacino's troubles deepen when he accidentally shoots and kills his partner while in pursuit of the killer.  The killer, played effectively by Robin Williams, is the only one who sees the shooting, and ironically becomes a partner in Pacino's cover up as Pacino's insomnia drives him slowly insane.  The story is told slowly and deliberately, but does not seem boring.  The motivations and storyline are crystal clear.  And the maturity with which Pacino's morally ambiguous situation is told is refreshing.  The main side character of the film is Alaska (well, British Columbia in reality).  Nolan, using Julyan's music, paints an eerie, spiritual portrait of this stark yet beautiful place.

Julyan's score seems electronic and cold, though an orchestra was used.  Despite this austerity, the music is effective in drawing us into the tense, atmospheric story.  There is a consistent, eerie motif that pervades the work, which rises in dramatic moments, but otherwise sits in the background slowly building tension.  It has a faint Native American feel, which is quite effective here, giving it an otherworldly quality.   There is not a lot of variety here, but that's okay, because the result is a consistent, coherent soundtrack.

I do not have any substantial criticisms for the soundtrack, except that perhaps there could be a little more variety in the work.  Julyan unabashedly retreats to the main motif when needed, but, to be honest, it works.

Why the soundtrack is good is also why it is not necessarily a great CD to listen to.  It is rich, dark, and atmospheric, and most importantly, it is very specific to the film, so unless you are really into this type of music (i.e. Ingram Marshall) or you love the film, it may not be for you as a purchase.