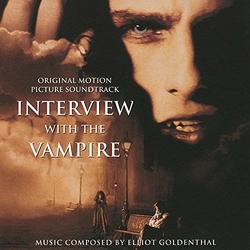 Interview with the Vampire

Review: Interview with the Vampire

Director Neil Jordon had originally enlisted his steady composer George Fenton to write the score to the adaptation of Ann Rice\'s popular genre-changing vampire epic. When Jordon was unhappy with Fenton\'s work, he brought in Goldenthal to take over and write an entirely new score, as you may have heard, in three weeks!!!

Due to the time constraints, Goldenthal had to rely on gut instinct and a desire to prove himself. Goldenthal sits on razor\'s edge, mixing classical styles ("Lestat\'s Recitative", "Santiago\'s Waltz") with atonal dissonance ("Plantation Pyre").
A track like "Claudia\'s Allegro Agitato" may started with an aggravated violin/ piano with contrasting percussive taps and plucks that move into a simpler, delicate piano piece to devolve into an unnerving mixture of a bassoon, French horn wails, high strings heartbeats and pained breathing.

Goldenthal\'s previous score to Alien3 was relentlessly bleak and only let up in moments of anguish, melancholy or violence. Here he tones down the desolation, bringing together with a variety of musical colors, older musical styles and an emphasis on doomed romanticism. The album starts with albums two main themes. "Libera Me" is the overture, a haunted boys chorus expressed against strained, high-pitched strings. The second track ("Born To Darkness Part I") is Louis\' theme is a lush melancholy romantic theme, with warmer, fuller strings.

These two tracks are his tent posts, which the rest of the varied score moves around. And for this type of score, there\'s a lot of variety. Goldenthal perfectly pulls off strong action cues ("Escape To Paris", "Louis\'s Revenge"), haunted, moody tracks ("Armand\'s Seduction"), slow build suspense cues ("Scent Of Death") and large operatic outbursts ("Madelene\'s Lament", "Marche Funebre"). He then brings it all together in climatic tracks like "Abduction and Absolution" where blasts of demonic brass and whirlwind string arpeggios segue into a haunting version of "Libera Me". Looking at Goldenthal\'s career over ten years later, this score is a sampler\'s plate of everything that would follow and one of his fan\'s favorites.

To credit Fenton, you can still hear his arrangements of period music through out the movie (particularly Claudia\'s piano piece, Chopin\'s "Nocturne #20 in C# Minor" and Lestat\'s piano piece, Hayden\'s"A flat Adagio e Contabilc"). Goldenthal and Jordon\'s collaboration was so successful, that the two of them would continue to collaborate on Michael Collins, In Dreams, Butcher Boy and The Good Thief. Interview with a Vampire was not Goldenthal\'s first mainstream work; he had been working steadily for the last five years, but Interview opened the doors. It gained him his first Oscar Nomination and led to much more visible work (Heat, Final Fantasy, Batman movies).

What is most surprising about it is that it\'s very listenable. That may sound odd, but horror scores tend to be hard to endure all the way through as there\'s no break in the tension. Here, the music is perfectly modulated (with the exception of the much-derided cover of "Sympathy for the Devil") as a self-contained listen. This is the perfect album for those dark nights of the soul.