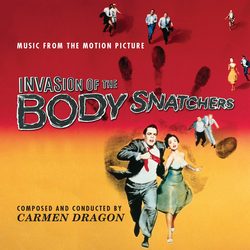 Invasion of the Body Snatchers

Renowned composer/conductor/arranger Carmen Dragon creates an astoundingly complex and ground-breaking work (his inventive use of low, staccato piano notes for suspense would inspire many composers to do the same) that perfectly emboldens the film's sci-fi terror and paranoia, while never neglecting the story's human emotions or its psychological and sociological underpinnings.