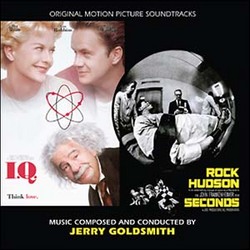 Jerry Goldsmith's I.Q. was mastered from a combination of 2-track and 3-track mixes from the Paramount vault. Mastered by Michael Matessino, the music—recorded in 1994—was recent enough to not require any restoration work, but it went through a careful EQ and clean-up process.

Regarding Seconds, the only source available from the studio vaults were mono 35mm music stems off of the original film. Because this three-channel split source contained dialogue, music and sound effects, there was a bit of bleed onto the music tracks. While many of the music cues were clean and easily mastered, the few cues with faint dialogue bleed had exacting and respectful clean-up work done on them to make the music as presentable as possible. Since we did not want to lose any of Goldsmith's precious, much-demanded music, there is still some bleed present in a few of the bonus tracks, but these tracks have been restored to the best quality possible given the source material.