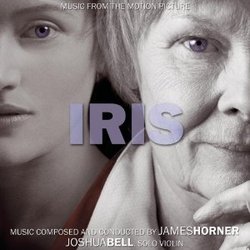 Iris is the film adaptation of John Bayley's memoirs on his life with novelist Iris Murdoch, who was stricken with Alzheimer's disease.  Bayley and Murdoch were married for 40-years, and the film jumps between the early days of their relationship, and the closing years of their marriage. Underscoring this touching and emotional film is a score by James Horner, who also employed the assistance of acclaimed violinist Joshua Bell.

Bell might be better known to film music fans for his performance on the Oscar-winning score to The Red Violin.  While there doesn't exist as frenetic or intense a performance in Iris, Bell performs with plenty of emotion, and eloquently captures the intimate nature of Horner's music.  For the most part, Horner has kept himself restrained, keeping the score quiet and warm.  Strings and woodwinds predominate the sound field, with violin and piano providing much of the solo work.

Sonically, this is clearly a James Horner score—the orchestration and use of the orchestra almost scream out his name, but familiar listeners will no doubt put this score in the same playing field as The Spitfire Grill and elements of Bicentennial Man.  I cannot really say that this is an engaging score—it pretty much drifts on by.  But there are a few notable tracks in there, such as "Part 1" and "Part 7." The album ends with a short folksong, "A Lark in the Clear Air." It is sparse and yet terribly moving; a wonderful ending to a very solid album.

Running a little under 50-minutes in length, Iris is certainly one of the shorter James Horner albums released in recent months, and if anything I didn't feel as though I needed more music.  There is enough material presented (and themes repeated) throughout the entire album that I concluded my listen feeling quite satiated, and ready to move on.  I might not rush back to listen to Iris anytime soon, but I'm certainly keeping it close to the top of the pile, just in case.