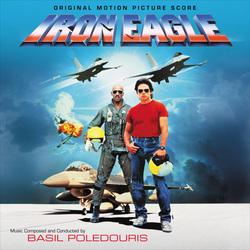 On the eve of the 2008 film music festival in Úbeda, Spain we thought it would be timely to remember the great Basil Poledouris, who experienced such a triumph of will and was fueled by a giant embrace from his fans when he visited the beautiful town in Spain mere weeks before his passing. Basil conducted a performance of Conan the Barbarian that is now legendary, but we remember him here with the premiere release of Iron Eagle.

One of the most iconic films of the 80s featured one of Basil Poledouris' most thrilling scores. The score is centered around one of his most infectious and exciting themes. This never before available score is an action blockbuster and a must for all Poledouris fans!