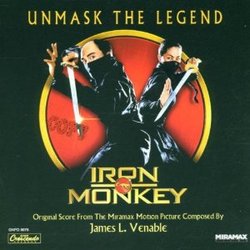 Listening to James L. Venable's rescoring of fight choreographer Yuen Wo Ping's chop socky import Iron Monkey, it's probably safe to say that original composer Richard Yuen didn't write something as overtly "asian" as what is presented here in GNP Crescendo's album for the American ruining – er, re-release of the film. Wo Ping (of The Matrix fame, as if all us freaking geeks didn't know this already) speaks very diplomatically in the liner notes of this CD about his "wonderful opportunity" to revisit and even "improve" his original film.

But something tells me that in a lot of circumstances, much lesser minds prevailed in the film's haphazard conversion from a veritable kung fu masterpiece into a blunt marketing tool meant to capitalize on the success of Crouching Tiger, Hidden Dragon. And the score reflects this: lots of pounding percussion, plucked koto and bending shanai. In keeping with what Miramax must think of the average American level of intelligence, this is utterly basic kung fu music as targeted towards a remedial third grader.

But I don't blame Venable, a completely capable composer who seems like he is merely following orders here. Saddled by what sounds like budget-constrained synths for many cues ("Street Band" is just plain embarrassing to hear), he does try to make the most of what he is given. In a nutshell, this amounts to an album with a few very long cues and a whole slew of short ones. Not a lot of overt themes here either, per se. So at fifty-five minutes, this is a bit of a squirmer if you intend to digest it all in one sitting.

That being said, the album has moments, to be sure. "Fox's Paranoia / Flying" manages to capture a soaring, albeit brief epic sense of wistfulness. And "Sad Wong", though saddled with a track title apparently cobbled together by Sesame Street's Elmo, creates some nice atmosphere as well.

"Cooking Montage" is about as exciting as it sounds, though it should have been called "Iron Chef". In fact, all the track titles here are across-the-boards lame. Personal faves: "Dead Bird" and "Witch Vs. Kid". Just screams "classy", don't it? (Chris Young, where are you and your brilliant cue titles when we really need them?)

"Shaolin Monk Fight / Ugly Virgin Fight" has a lot of percussive spunk to it, one of the more exciting and varied cues on the album, though much of this isn't anything we haven't heard done equally well in the aforementioned Crouching Tiger, Hidden Dragon. And there's nothing overtly wrong with cues like "Fei-Hong's Fight", "Poetic Justice", or the ten minute indulgence of "Fei-Hong's Rescue", except to say that before long all the incessant drumming may begin to merge with the freeway hum outside your car.

Overall, though, I have only one major bone to pick with Iron Monkey. And it has more to do with the conception of the score than Venable's execution. Occasionally goofy and even downright patronizing, it rather makes my skin crawl to hear a major studio pander this type of bastardized Benihana rescore to the public. Is there still such a gigantic cultural rift between the East and West that a major studio feels the need to plaster this kind of Hong Kong phooey onto a film that really didn't need it? It is emotionally alienating, never taking a step beyond the distant musical observations of "oh look, the Chinese people are fighting" or "aw, now the Chinese people are all sad". Tsk, tsk. And here I thought the entertainment industry was supposed to be progressive-minded.