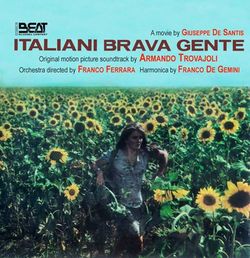 The score for Italiani brava gente was assigned to one of the greatest Italian Maestros of the 20th century, Armando Trovajoli. He was aided by a large symphonic orchestra, including amazing soloists and Padre Sartori's chorus, with orchestral direction in the hands of one of the greatest conductors ever, Franco Ferrara.

A release much desired by Franco De Gemini for many years, the harmonica is one of the main solo instruments of this highly emotional score where the orchestra and chorus are combined to create a masterpiece—probably one of the most important in the artistic career of the great Roman maestro.

The original concept album featured narration over the beautiful score and lasted around 40 minutes. For this 2-CD edition we decided to present one CD that features the original album program and add another CD featuring the complete score without narration, including some previously unreleased material. The flip-cover design replicates the original gatefold LP artwork by RCA and includes a 20-page booklet, with liner notes by Franco De Gemini, Claudio Fuiano (audio restoration and mastering) and Roberto Pugliese. The booklet features original artwork edited by Alessio Iannuzzi. A real masterpiece!